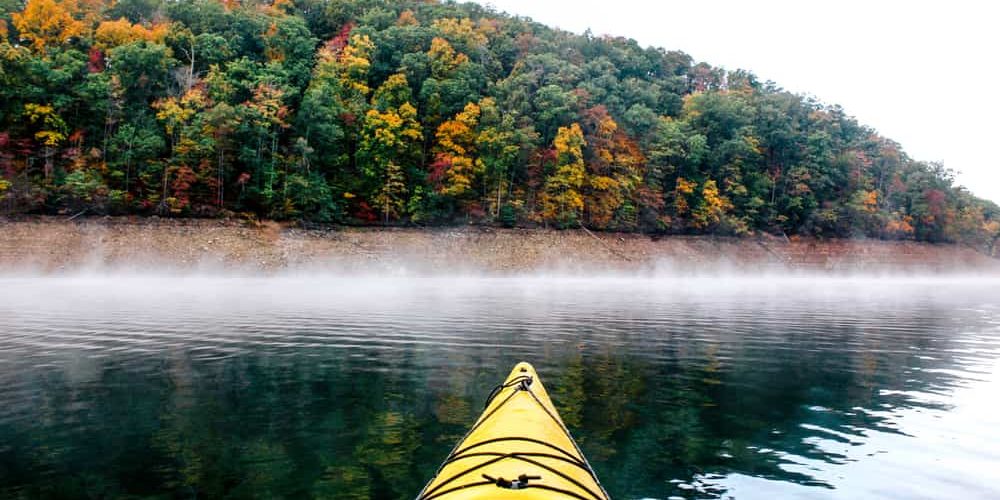 North Carolina is overflowing with wonderful lakes to visit! From the stunning Appalachian Mountains to the west, extending all the way to the Atlantic Ocean on the east, there is going to be something for everyone on this list. Fishing and waterskiing are both popular activities in North Carolina so be sure to pack your summer skis and fishing rod!

Lets have a look at the best lakes to visit in North Carolina: Lake Norman is the largest manmade body of fresh water in the state. With either boat access points and plentiful fishing, this lake is an angler’s dream. It also boasts two yacht clubs for you to store your boat at.

Despite having been created in 1964, the lake has attracted a variety of species over the years and makes for great bird watching and animal sightings from the water. Be sure to keep you eyes peeled for anything rustling in the bushes along the water’s edge!

Just a quick drive north of Charlotte, this is a great spot to spend a day or weekend if you are visiting! Jordan Lake is conveniently located just west and south of Raleigh and Durham respectively. This large reservoir covers an area of 13,940 acres and provides a ton of activities. There are over 1,000 campsites along the lake ranging from primitive tent camping to full RV hookups. There are also seven beaches located along the shores nestled between 17 miles of hiking trails.

Animals are also abundant along the water as the lake’s ecology system has exploded in recent years. You can also visit the visitor center’s exhibit hall to learn a little bit more about the wildlife surrounding the lake! While Lake James allows jetskis, fishing and camping along its shores, it is perhaps better known for being the set of multiple blockbuster films. It was used as a stand in for Lake George in New York state for the film The Last of the Mohicans starring Daniel Day-Lewis. It was also featured in The Hunt for Red October in the final scenes of that film.

The lake itself offers plenty of recreational activities and is located in the mountains of western North Carolina. The hiking trails that surround the lake offer spectacular views of the Appalachian Mountains. With a reputation for being one of the best fishing lakes in North Carolina, High Rock Lake has hosted many Bassmaster Classic fishing derbies. It is mostly known for its abundance of largemouth bass.
There are a number of boat ramps along the water’s edge, both public and private. There are no restrictions on boat motor sizes and personal watercraft are legal for use on the lake. There are also a number of private campgrounds along the water for you to pitch and tent in between fishing trips out on the lake! Lake Glenville is just a short drive from the town of Sylva in western North Carolina. It makes today’s list due to its place at the top of the highest lakes east of the Mississippi River in the United States.

It is a relatively small lake compared to others on the list, however it still offers great fishing and boat access with a few short hiking trails along the water’s edge. Badin Lake might be small but it packs a punch in terms of stunning views. Watching the sunset over this lake is a locate pastime that visitors mustn’t miss either. There are a wide variety of recreational activities to be had on and around the lake. Golf, hiking, camping, and hunting can all be found readily in the area. Fishing and boating are also popular water activities. Largemouth bass, smallmouth bass, crappie, catfish, spotted bass, white bass, and striped bass can all be found in the lake. Though trout do not exist in the lake, so don’t be disappointed if you don’t catch any of those! Located in both North and South Carolina, Lake Wylie straddles the border and offers 325 miles of shoreline. There are two public boat access points and multiple communities that surround the lake and offer activities for visitors to indulge in.

There are a number of locations to rent boats, including pontoon boats on and around the lake. Fishing is quality as are the good times to be had here! Located in the Nantahala National Forest swimming, boating, and skiing are all popular lake activities. Nantahala is on the smaller side of lakes, though it is manmade. Originally created to provide electricity for wartime efforts, it was completed in 1942. Since the lake was man made and is surrounded by mountains, the lakebed becomes very deep very quickly. Many different species of fish can be found here, included panfish.

The Nantahala River just below the river is known for its spectacular whitewater rafting and kayaking. When the water is being released from the dam, the river is considered “on” and provides very good whitewater conditions. Lake Mattamuskeet is the largest natural lake in North Carolina and is relatively shallow, averaging between two and three feet throughout the entire lake. This lack of depth is due to its proximity to the Atlantic Ocean. On the flip side, its proximity to the ocean also creates wonderful birdwatching conditions. The area is known for its large winter populations of Northern Pintail, Green-Wing Teal, Canada geese and tundra swans.

Sandwiched between the Great Smoky Mountains National Park and the Nantahala National Forest, Lake Fontana. With tons of inlets, coves, and islands created by ancient mountains tops poking through the calm surface waters, there is a ton to explore with your boat on this lake.

The lake is also surrounded by trails on both the Great Smoky Mountain side and the Nantahala National Forest side. Some trailheads can only be reached by boat when the water is high. Except for a multi-day hike, this is the only location to access the most remote areas of the Smoky Mountains National Park. On clear days, the observation tower at Clingmans Dome provides an amazing view of the entire lake from nearly a mile above. Belews Lake is located north of Greensboro and Winston-Salem. Boating, fishing and water skiing are all popular activities on the lake. Its large surface area allows for quality water skiing!

There are two marinas on the lake that offer places to eat and boat rentals, sales, and service. There are also many camping spots along the water’s edge, so be sure to bring your tent along so you can watch the sunset over the stunning water! Another popular location for filming blockbuster films, Lake Lure is possibly best known for the popular film Dirty Dancing starring Patrick Swayze and Jennifer grey. It has also hosted A Breed Apart, Firestarter, My Fellow Americans, and The Last of the Mohicans.

With plenty of lodges, inns, resorts, and campgrounds along the lakeshore, there is sure to be some kind of accommodation that fits your needs. Along the lakeshore are plenty of quaint towns and activities for people of all ages. Ziplining, horseback riding, fishing, trails, beaches, and even a toy museum! With 65 campsites along the lakeshore, this is a great place to spend the night. There are also two entry points for boats, along with hiking trails for those less inclined to get on the water. Wildlife is abundant surrounding the lake and fishing is prime in the area.

There is a water skiing course located at the north end of the lake, and it is also a great fishing lake. Randleman Lake is the newest lake on our list, created in 2004 and only opened to recreation in 2010. Because the lake is federally managed there are many rules that apply recreation on the lake. Fishing and sailing are permitted, though sailboats with main masts over 25 feet are prohibited. Personal watercraft are prohibited and boats are not allowed overnight. There are also restriction on fueling boats in the area. There is also a lake-wide speed limit of 25 miles an hour. No gasoline or liquid fueled motors are allowed north of the Highway 62 bridge. Lake Tahoma is a private lake located in the mountains of Western North Carolina. No speedboats or personal watercraft are allowed on the lake. If you are lucky enough to gain access, the fishing on the lake is superb.

Despite the lack of development in the area, there is a beautiful casino that has been built at the end of the a long pier in the center of the lake. Constructed in the 1920s, the structure is made of stone and wood.

North Carolina is overflowing with wonderful lakes to visit! From the stunning Appalachian Mountains to the west, extending all the way to the Atlantic Ocean on the east, there is … Read more